Spain midfielder Thiago Alcantara claims that the focus of the national team is only on the upcoming World Cup 2018 qualifying match against Albania and not on the Catalan issue. 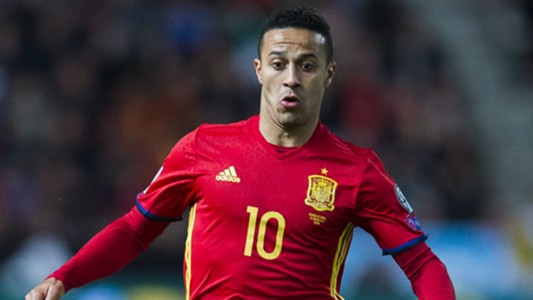 Catalonia have been coming up with various protests regarding the independence and there have been violent clashes back at Barcelona. As a result, the recent match between Barcelona and Las Palmas had to be played behind closed doors at the Camp Nou. A number of Spain players who are based in Catalonia – like Gerard Pique – have come in support of the independence issue, but Thiago Alcantara refused to get politics into football.

The Barcelona defender has even threatened with the possibility of retiring from Spanish football if the demands of the Catalonia people are not met. Thiago Alcantara says that Spain are only focused on finishing top of the group and reaching the World Cup 2018 in style. END_OF_DOCUMENT_TOKEN_TO_BE_REPLACED

Wales have decided to make a surprise inclusion for the upcoming World Cup 2018 qualifying matches against Austria and Moldova, as a youngster Ethan Ampadu is one of the names in the 25 man squad.

He is one of the latest young talents to make the switch to Chelsea, as he has decided to make West London his home from Exeter. The 16-year-old is not done 17 until September, but this will not prevent him from being one the sidelines for Welsh national team, according to Coleman. He says that every player capable of representing the national team will get a chance with Wales.

Coleman also denied that the inclusion of Ethan Ampadu is primarily in order to make him available for the Welsh team in the future. The centre back had been with Exeter throughout his career, but he is also capable of representing for England. The defender is also capable of playing as a defensive midfielder. He has signed a contract with Chelsea until the summer of 2019. END_OF_DOCUMENT_TOKEN_TO_BE_REPLACED